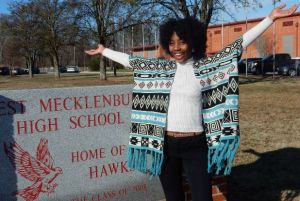 Miracle Farrar says that from a young age, she always had high hopes for herself. But school – and life – haven’t always been that easy for Miracle. She was born premature, with a number of related health issues – partly the reason behind her mother’s choice of “Miracle” as a name for her baby daughter. Miracle was also bullied a bit when she was younger, mainly because she seemed to always have the right answer when called upon in class – something other students didn’t always appreciate. So she chose to stay quiet to keep from drawing attention to herself.

But lately Miracle has come into her own. Now a senior at West Mecklenburg High School, she attributes much of her growth and success to her involvement in Communities In Schools and the federally funded TRiO program that CIS operates in several Charlotte-Mecklenburg high schools, including West Meck.  She was first enrolled in CIS in middle school, and then continued when she entered 9th grade at West Mecklenburg. She’s always made good grades, but credits CIS for “really pushing college” on her through the TRiO program. Miracle has two older sisters (and two younger brothers that don’t live with her), but she will be the first in her family to go to college. Both her TRiO counselor, Alexis Bibbs, and her CIS Site Coordinator, Jeannette Jackson, have helped Miracle research colleges and attend college fairs. “Just having the opportunities to visit and have exposure to college campuses has been a huge help,” Miracle said.  “They also know the right questions to ask, to help me find a school and a program that will be a good fit for me.”

Both Mr. Bibbs and Mrs. Jackson can’t say enough good things about Miracle. “Miracle is really a self-starter – she keeps me on my toes,” laughed Mr. Bibbs. “She’ll bring me an application, with an envelope and a stamp, and say, ‘Now this needs to be mailed by such-and-such date.’”

Miracle’s favorite subjects are History and English. This spring she’s taking Honors English IV, Honors Spanish III, AP Psychology, and AP U.S. Government & Politics. She is passionate about community activism and political science, and is thinking about majoring in pre-law. Last year she formed a school club, UPLIFT West Meck, and organized a march and a cookout to get students involved and give them a voice, as a means to instill pride in their school, which has sometimes endured negative stories in the press. Oh yes, and she’s found time to play on the school’s tennis team for four years! All this and she currently has a 4.1 GPA!

Miracle definitely plans to attend college – the hard part is making the final choice, as she has many options – so far, she has been accepted to 10 colleges and universities. Stay tuned, because this young lady is clearly a “Miracle in the making!”