"CIS helps me the most by learning to be an example for others. I enjoy being a part of the group." 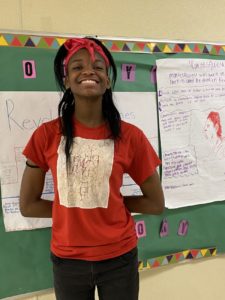 On a recent visit to Ashley Park K-8 School, Melanna stood out as one who consistently raised her hand and appeared eager to respond to questions posed by the counselor leading an SEL (social-emotional learning) workshop at the school. A 7th grader in CIS at Ashley Park, Melanna was animated, bubbly, and clearly enjoyed participating in the group session.

SYDKIMYL, an educational consulting group, is providing an SEL program for middle school students at Ashley Park this school year, in coordination with CIS. Phyllis Cunningham, CIS Site Coordinator at Ashley Park, said the students seem to really enjoy it and relate well with the counselors. “The counselors are what I would say are on the ‘young’ side and the kids can just sense that and respond to them,” said Cunningham.

When asked about the SYDKIMYL sessions, Melanna confirmed Ms. Cunningham’s assessment. “Yeah, I mean it’s cool,” said Melanna. “I like the different lessons. I’m learning a lot and also how to make new choices.”

Melanna has been in CIS with Ms. Cunningham for three years now. She said Ms. Cunningham helps her by “giving me small talks and checking on my grades.” 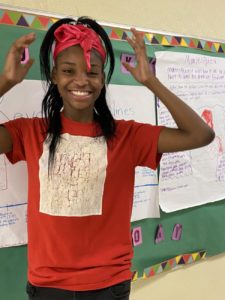 “CIS helps me the most by learning to be an example for others,” added Melanna. “I enjoy being a part of the group.”

Melanna is glad to be back in school after the 12+ months of remote learning. One of the hardest things during this time was her uncle passing away.  Melanna’s favorite subject is science, and she’s on the cheerleading squad at school. She’s not sure about a career yet, but might want to be a chef. She explained that her current goals for this school year, with support from CIS, are “becoming a better me” and “making it to the 8th grade.”

We think you are doing just fine, Melanna… keep leading by example as you are doing, and we will see you in the 8th grade!