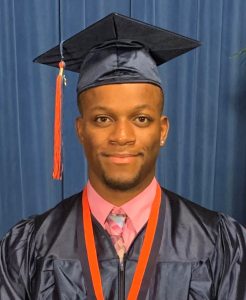 You can tell a lot about a person when you ask what motivates them. Answers often describe the “who” that motivates them, such as a parent, grandparent, teacher or coach.  CIS graduate Jaime Halton, on the other hand, had an unexpected answer when asked this question. He said his greatest motivation is “the fear of falling behind.”

Jaime explained further, “The fear is not just for myself, but anyone I come across and can influence. I have a few friends who are not wanting to go into higher education and I want to help them look for jobs that’ll satisfy them for the long run, or look for trades and things they’re good at to see what their future options may be.”

Positive and “glass half-full” would be other attributes that describe Jaime Halton. Jaime comes from a family of eight kids – three girls and five boys. He is “number 4” in the line-up, and you often hear the “middle child” in other families complaining about the oldest being “bossy” and the youngest being “spoiled.”  Not Jaime. “I feel I have the perfect set-up,” he said, “because I have those I can look up to and those I can lead.”

Grades notwithstanding, Jaime is an excellent student who enjoys learning. His favorite and best subjects in school are Biology and Chemistry.  “I absolutely love the principles of biomedical science and the human body systems pathway,” said Jaime. “These subjects deal with promoting and explaining life, the single most precious thing to ever exist.”

Jaime is a gifted athlete as well, and has played multiple sports all through middle and high school… football, basketball, baseball, track. In high school at Vance, he played on the football team his freshman year, but gave it up after 9th grade to focus on track. “Track was more of a fit because for me, that’s where character and leadership are built,” Jaime explained. “I absolutely loved the environment at every meet and will definitely miss the people I’ve met along the way. My favorite event is, without a doubt, the 300 meter because it tests the mind first.”

But what really excites Jaime these days is his next chapter:  he is headed to UNC-Chapel Hill on a full four-year Covenant Scholarship. He credits Communities In Schools for introducing him to UNC on a campus tour there last fall.

“Before November 2019, I was sure I was going to Howard University,” said Jaime. “My decision to switch my sights to Carolina was 100% based on the trip to the UNC campus with the CIS crew because it was the first time I actually viewed the campus. While we were there we met up with Khamiah [a former CIS/Vance student] and she really showed her passion for the university and introduced us to the Covenant scholarship. If not for that trip with CIS, then I highly doubt I would have completed my Carolina application.”

Now Jaime is “all things Carolina” and is excited to be a Tar Heel.  He says he can’t wait to meet new people, enjoy new foods, learn more about other cultures, and become involved in volunteer and intern opportunities.

Jaime also hopes to play intramural sports for fun at Carolina, but he primarily will be focused on his studies. His plan is to major in Exercise and Sports Science with a minor in Neuroscience. His ultimate goal is to attend medical school and become a sports medicine physician.

We’d say that Jaime has a pretty solid plan and we couldn’t be more excited for him. Congratulations, Jaime!