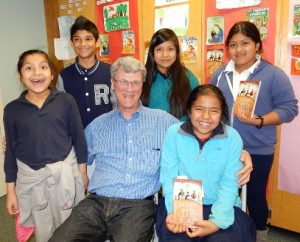 If you look up “Renaissance Man” in the dictionary (or internet!), we’re pretty sure you’ll find George Bohmfalk’s name right next to it. A retired neurosurgeon who moved to Charlotte from Texas in 2008, George has also owned and was the chef of a fine-dining restaurant, he played the organ for a church in Texas, and he’s fluent in Spanish. But here in Charlotte, CIS thinks (selfishly!) that he has found his true calling: volunteering with CIS students at Montclaire Elementary!

Walking the halls at Montclaire on any Monday or Tuesday, you are likely to run into George. On Monday mornings, George coaches a CIS Scrabble Club; on Tuesday mornings, he works with new-arrival Spanish speaking Kindergarteners (he is fluent in Spanish); and later on Tuesdays, you can find him in the CIS office at Montclaire, having lunch with and then leading a 5th Grade Book Club. On a recent Tuesday, they were discussing James and the Giant Peach and also preparing for the upcoming “Battle of the Books” competition. And George was also right there with his Scrabble Club team at the final Scrabble Club Tournament CIS held in June for all of our elementary sites. Talk about dedicated!

About 18 months ago, George says he was looking for an opportunity to volunteer, and happened to see information about Communities In Schools in The Charlotte Observer’s annual “Giving Guide.” He was interested in working with kids, especially at-risk or economically disadvantaged students.In addition to CIS, George volunteers with CRRA (Carolina Refugee Settlement Agency). “I believe that most privileged people who have time on their hands should do volunteer work, for their own benefit as much as the recipients,” said George. “Getting an insight into the difficult lives of innocent children and refugees forces one to examine attitudes about refugees, safety nets, health care, immigration, poverty, education, and many other pressing social problems. While I feel that many social issues can best be handled through government programs, volunteering will always play a critical role in helping those less fortunate than ourselves.”

George says the teachers and staff at Montclaire seem to really love the school and all of the kids. “There’s lots of caring, concern, and affection,” said George. “I’m especially impressed by the professionalism and dedication of the CIS staff, especially the Site Coordinators,” he added.

WE are impressed with George’s commitment to our students and the way he is giving back and sharing his many talents. Thanks for all you do, George!