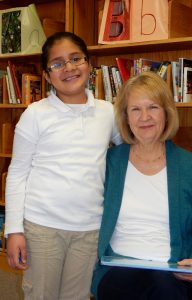 Fay Grasty has been volunteering as a tutor and mentor with CIS students at Billingsville Leadership Academy (BLA) for six years now, but her connection with CIS goes back MUCH longer than that! At a conference in 1983, Fay heard national CIS founder and president (now vice chairman) Bill Milliken speak. She was so impressed with him and what he had to say about Communities In Schools and the philosophy behind it, that she immediately called her good friend, Cynthia Marshall, to tell her about it. Cynthia was the incoming president of the Junior League of Charlotte and she contacted Bill Milliken to come speak at a membership meeting. And that was the beginning of CIS in Charlotte!  (For those who may not know the full story, Cynthia Marshall became CIS-Charlotte’s founding executive director in 1985, after she raised funds and commitment from a number of Charlotte’s top corporations to initiate the CIS program in Charlotte.)

Fay was actually on staff at CIS for a few years in the late 1980’s, coordinating corporate and community partners interested in volunteering and supporting the schools. After a career in various nonprofits, Fay is now retired and able to devote more time to volunteer. Fay is a long-time member of Myers Park Presbyterian Church, and the church has a partnership with BLA which includes working with CIS.

Fay is excited about a new volunteer training program that CIS launched in January, “Coaching Students to Success.” She saw an announcement about it in the church newsletter and decided to check it out. Fay said the three-hour training was very well done. “I came away with a lot of tools that will help me work with students in setting goals and working with them to achieve their goals,” said Fay. “I have never felt as prepared to work with a student until this training.”

Fay has just been matched to a new student, Vilma, a fourth grader at BLA. She says Vilma is “smart, inquisitive and thoughtful,” and Fay is looking forward to working with Vilma and utilizing the new “Success Coach” training.

When asked why she volunteers, Fay had this to say:  “I volunteer because I feel we are all called to help one another in life. I also feel that the more fortunate we are, the more responsibility we have to give back and contribute where we can to make the world a better place. What better way to act on that than by helping a young person be the best they can be and be successful in life. We all have potential…sometimes we just need someone to bring that out in us. I feel that is the role of a mentor.”

How lucky are we – and the students at Billingsville – to have Fay Grasty on our team!