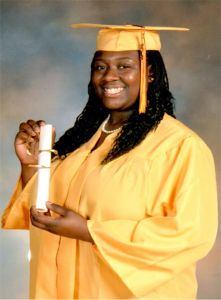 Standing nearly 6-feet-tall, it’s no surprise Anna Purdie played center for West Charlotte’s women’s basketball team. Look at her resume, however, and you’ll see she also played a central role within her school off the court. In addition to taking AP classes, Anna’s extra-curricular activities range from the academically-based National Honor Society and Beta Club, to the service-based Key Club, to leadership positions in the Student Council, Yearbook Staff and Pep Squad. The list goes on.

For most students, the transition from middle to high school can be rough enough without the added pressure of a geographic move. Anna, a native New Yorker, came to Charlotte in 2009.

“At first I was scared,” Purdie admitted. “All I heard about West Charlotte in the media was negative.” Thanks to her self-described “inquisitive” attitude, however, Anna sought to make the most of her situation. “I just wanted to figure out where to begin. I wanted to make friends.” And friends she made, beyond just her fellow students. Anna soon found “a great support system” in the teachers and staff, one of whom is Communities In Schools employee, LaQuetia Hollis.

“Anna and I became acquainted when I assumed the position of Talent Search Counselor at West Charlotte,” Ms. Hollis stated. [Talent Search is a CIS college access program for first-generation and low income students, funded through a federal government TRiO grant.]   “We frequently spoke of the struggle she endured to get to her senior year, but Anna encompassed such a passion to be a true ‘lion’ [West Charlotte mascot]  at heart by being a leader among her peers.”

Anna was asked to serve as “parliamentarian” for the Talent Search program, a student leadership position in this college access program. “The site coordinators helped me become a better mentor to other students,” Anna said. “CIS did everything from modeling effective support skills, to giving me a snack when I was hungry.”

Ensuring that all students have adequate nutrition is a cause that Anna holds especially dear, and a cause that she manifested through her creation of the Lions Café. The club brings healthy food choices into the school cafeteria, choices that students are more likely to eat and enjoy.

“West Charlotte is a low budget, Title 1 School,” Anna stated. “These are some of my peers’ only meals, so when they come to school, they enjoy eating. I wanted to bring awareness to that.” Anna worked with other students, teachers and the cafeteria management to perform taste tests and discuss topics ranging from a healthy variety to customer service. “Ultimately,” Anna stated, “I wanted students to know that we care.”

Talking with Anna, you get the sense that when she sees she is needed, she humbly steps up to the plate. While participating in a book drive for the Ronald McDonald house at Nations Ford Elementary, Anna was asked to be a guest speaker and admits the honor gave her “chills.” Maybe that’s because despite being seen as a leader by students and faculty, Anna ultimately sees herself as “a helping hand”.

“I just want to be a blessing to someone else,” Anna stated, “because at the end of the day, we’re all God’s children.” After winning four scholarships*, Anna plans to continue her commitment to helping others as an incoming freshman at Winston Salem State University this fall. Better yet, she already knows what she wants to study: education. And let’s face it – we could all learn something from this young woman.