Myers Park High School student Tyzel Hayden writes a letter to his fellow classmates and to the community at large. 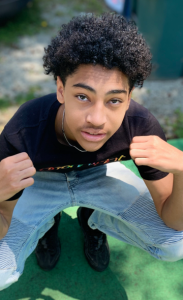 “2020 has been a memorable year.  It has only been 4 months and we have been faced with unfortunate events and tough obstacles.  Throughout these dark times there have been glimpses of light, which we as a nation have to take advantage of in order to progress.

Covid-19 is a catastrophic event that puts us all into a loophole; our lives consist of us being at home every day.  Although everything seemed dreadful, my peers and I took this time to educate ourselves and grow our brand.   We educated ourselves on political issues, racial disparities, systemic racism in our schools and communities.  We also took the time to reflect on our mental health.  Being in quarantine really tested our patience and opened our eyes, we have seen events that would usually be brushed along and we took action.

The recent murders of George Floyd, Sean Reed, Ahmaud Arbery, and Breonna Taylor have created a wave of revolutionaries across the nation and even in parts of the world; it has brought us together and created a sense of unity and stability despite the media trying to divide us and create false propaganda about what’s happening.  These murders have also shown me how oblivious people are to world affairs, as they are too caught up in social media, celebrities, and gossiping instead of the reality of life and the struggle Black Americans face on a day to day basis.

People do not even realize we are still being affected by gentrification and redlining.  People must learn to recognize and understand the drawbacks of cultural implicit bias because it is largely responsible for the socio economic disparities in America.  Thousands of Americans dying from police brutality in the last decade and 24% of those were black people.  The American wealth gap is too extreme as Black and Hispanic Americans live in poverty at twice the rate of whites.  Unless we address systemic racism and social disparities as one united people, privilege will continue to deny progress for all.  Historically, privilege exists because of enduring racism and biases, as Francis E. Kendall described it as “Having greater access to power and resources than people of color [in the same situation] do.”

In the future, we must keep fighting, and I hope that we come together.  I want our country, America, to be a nation where everything is determined by hard work and perseverance.  I want my baby sisters to know that they will be heard, by not allowing anyone to silence their efforts, to improve our society.  I want my brothers and sisters to take it upon themselves and become WOKE through education.  Understanding the school system cannot teach you everything you need to know.  As an American in the pattern of my ancestors who fought for civil rights, I will strive for equality and equity with a focus on  Justice for ALL, as stated in our daily pledge of allegiance. The goal is to build a future for all Americans where yes – Black Lives Matter, but ultimately all lives are valued equally.”

Tyzel Hayden is a rising junior at Myers Park High School and a member of the Class of 2022. He has been a participant in CIS for the past two years and has been involved in multiple CIS-led social capital events. At Myers Park, he is currently president of Lead 2020, a student group that focuses on issues that young Black males face daily.